A market analysis report example determines the characteristics unique to the particular market and analyzes the information, which is extremely helpful in the decision-making process in the business relations. By conducting the market analysis report example, it is possible to gather the valuable data, which will help to know the customers better, determine the relevant pricing, and figure out the competitors’ sensitivities. 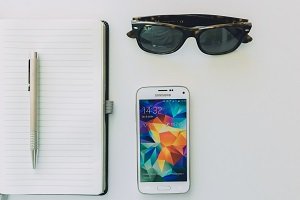 The global smartphone market is assumed to slow essentially over the next few years. Under a condition of a slowing smartphone market, the large vendors are undergoing growth saturation, and rising brands are interrupting existing brands’ long-standing business models to raise their share. The developed markets were in the center of this year’s deceleration. The core three markets of United States, Europe, and China continue to reach the new highs. The number of the first-time buyers in these countries is shortening rapidly. Therefore, the phone upgrades are the primary factor, which stimulates the sales.

The top list of the greatest vendors of the smartphones heads two giants – Samsung and Apple. As a world leader, Samsung has sold 81.3 million units in 2015 mostly due to its low-cost smartphones and the Galaxy series. In the first quarter of 2016, this amount has remained approximately the same. However, Samsung’s market share has increased from 23.2 in 2015 to 24.1 in the first quarter of 2016. Apple is the world’s second-largest smartphone vendor and has sold 60.2 million iPhones during 2015. Apple’s market share in 2015 was 14.8 percent. In 2016, there is a growth estimated at 3.1 percent up to 17.9 percent.

By varying smartphone market dynamics, Chinese brands are developing as the new top brands in the global scale. To this end, there are two Chinese brands – Huawei and Xiaomi – which were in the list of the top five worldwide smartphone vendors in 2015. These brands held 11 percent of the market. In the first quarter of 2016, one more Chinese company – Oppo – was included in the top list. As a result, currently, they represent 17 percent of the market together. These three Chinese smartphone vendors show a great performance, Oppo is the best within them, and take share from the leading players such as Lenovo, Samsung, and Apple. Huawei represents a strong smartphone demand in Europe, South and North Americas, and Africa. At the same time, Xiaomi and Oppo smartphone sales rise in emerging Asia and Pacific markets by 20 percent and 199 percent respectively.

In the long term, a slow but stable growth of the smartphone market is expected. Predominantly, this growth will be caused by Asian market, India and Indonesia, in particular. Smartphone sales will be driven by the growing demand for the low-cost smartphones in emerging markets and for a transition from 3G to 4G smartphones, which will be supported by 4G connectivity promotion plans from communications service providers in the various markets all over the world. Additionally, a great effect on the smartphone market vector of developing will have a growing popularity of multi-SIM smartphones, increasing the corporate acceptance of smartphones as business class smartphones, the introduction of the faster data networks and the third-party application systems.