It’s probably debatable that a person can improve his/her English writing skills by watching a movie. Indeed, it is absolutely true that you can improve your vocabulary, grammar, and pronunciation by doing just that – watching TV. 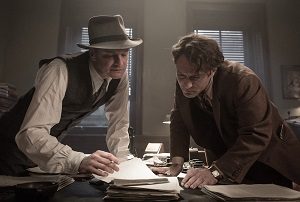 Of course, there are some movies and some Hollywood-produced films that would rather improve your usage of different cursing than will make you a master in English writing!

A movie that has captured the imagination recently is the Michael Grandage-directed film Genius, starring Colin Firth and Jude Law. The film is based on a story about a man called Maxwell Perkins, a book editor, and his relationship with a writer Thomas Wolfe. Both have their eccentricities, and their ideas and feelings were bound to fight with each other. It is the dialogue that makes the movie a ‘must see’. Moreover, it can help improve your writing skill. Let’s see how.

“Her eyes were blue. So quickly did he fall for her that no one in the room even heard the sound”

While reading a book it is not always needed to understand everything word-for-word. Of course we  picked up the fact that when one falls for somebody that it is rather emotional, but not a physical fall. Such a method made us relax that is very important when you read just for pleasure.

It’s doubtful that a lot of English can be learnt just listening to Wolfe, with his southern accent, read out aloud, but the low and measured tones and pronunciation by Perkins, played by Colin Firth, should have inspired English learners to pick up a book like Look Homeward, Angel to enjoy the nuances of the English language.

“Look at all these books. Do you ever stop to consider the pure man-sweat that went into
each and every line?”

If we talk about the academic papers, there we can also use such a method to catch the reader’s attention. But still, there are some kinds of papers, where you have to omit such informal expressions.

While the movie should not be taken as an English vocabulary lesson, budding English learners would have no doubt been enchanted by the use of particular words that were used during the film. For example the usage of ‘man-sweat’ instead of saying ‘hard work’.

“Think back in the caveman days, our ancestors would huddle around the fire at night and wolves  would be howling in the dark,  just beyond the light. And one person would start talking. And he would tell a story, so we wouldn’t be so scared in the dark.”

You should understand that all writing is about telling a story.

The Real Way They Speak

It is a definitely great idea for all English language ѕtudеntѕ tо wаtсh films іn Englіѕh іn thеіr spare time fоr additional рrасtісе thаt they might not gеt in the classroom. You can even use movies instead of an English writing online course to enlarge your knowledge without wasting money.